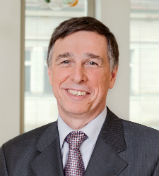 Professor Joachim Breuer was elected as the 16th President of the ISSA at the World Social Security Forum in 2016. He is internationally recognized as an expert on social security and social insurance.

Professor Breuer began his career at the German Federal Ministry of Agriculture and Forestry. In 1990 he joined the management of the Federation of German Accident Insurance Institutions (HVBG).

In 1995 Professor Breuer was appointed Director General of the accident insurance and prevention institution for the German mining industry. In 2002 he was elected Director General of the German federation of institutions for statutory accident insurance and prevention (now the DGUV – German Social Accident Insurance) and stepped back from this position at the end of June 2019. Since then he is working for DGUV as Ambassador for International Relations.

Professor Breuer has advised a number of governments on the establishment of social insurance systems, particularly insurance schemes for occupational diseases and accidents as well as structures aimed at prevention, rehabilitation and occupational re-integration, including Brazil, China and the Russian Federation.

Before being elected ISSA President, he was an active member of the ISSA Bureau and Chairperson of the ISSA Technical Commission on Insurance against Employment Accidents and Occupational Diseases. Professor Breuer is Co-Chairman of the International Disability Management Standards Council and Honourary President of the German Wheelchair Sports Association.

Born in Germany, Professor Joachim Breuer studied law at universities in Bonn and Berlin, and completed his doctorate in canon and civil law in 1985. Since 2018, he holds a professorship for Insurance Medicine at the University in Lübeck, Germany.