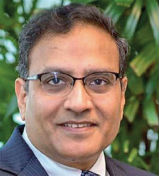 As CEO, he led the design, development and the rollout of the scheme and oversees its implementation in the country.

He holds a Doctorate in Health Economics and a Master of Health Sciences from the Johns Hopkins University, USA. He is an alumnus of the prestigious Indian Institute of Technology-Banaras Hindu University (IIT BHU) and IIT Delhi where he completed his B.Tech and Post-Graduate Diploma, respectively.

He is also a Chartered Financial Analyst (CFA).

Dr. Bhushan is a bureaucrat-turned-economist with a career spanning 35 years across a multitude of sectors.

He served for nine years in the IAS prior to leaving government service. Thereafter, he worked as Senior Economist with the World Bank Group prior to moving to ADB.

Until his appointment as CEO, AB - PMJAY, he served as Director General, East Asia Department of the Asian Development Bank (ADB).

He has held multiple positions within ADB including Director General, Strategy and Policy Department and has led ADB’s engagement with several Asian economies including the People’s Republic of China..